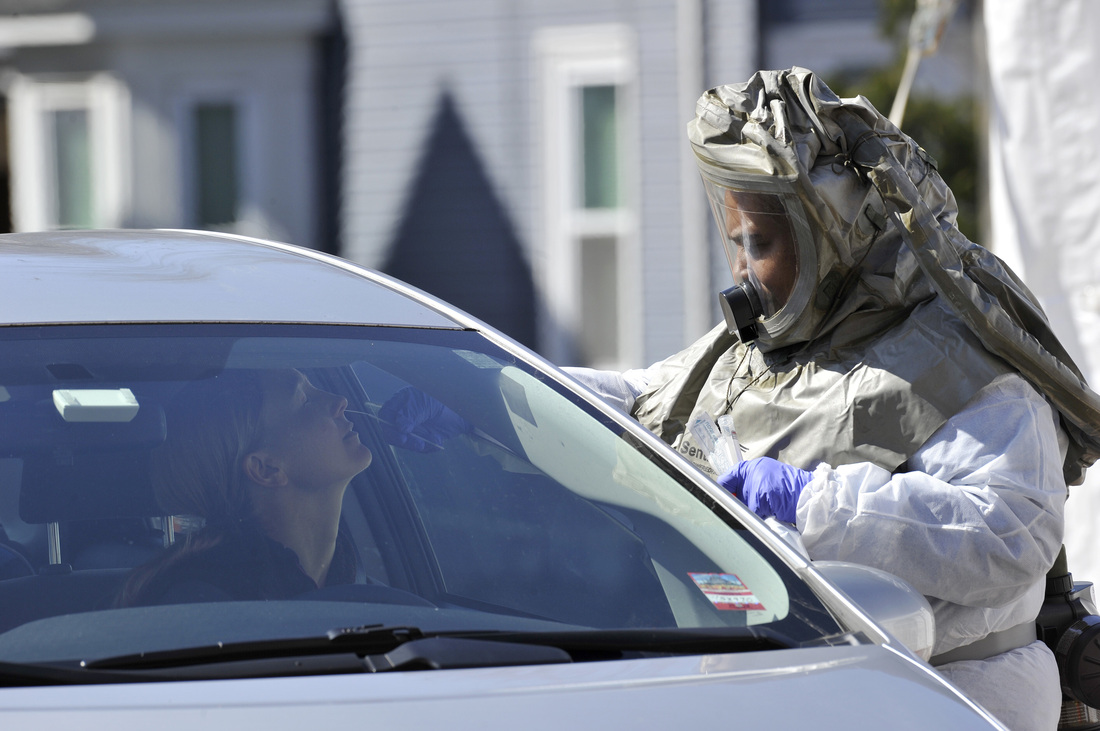 A medical professional takes samples from person at a drive-through coronavirus testing lab set up at Somerville Hospital in Somerville, Mass., on Wednesday. 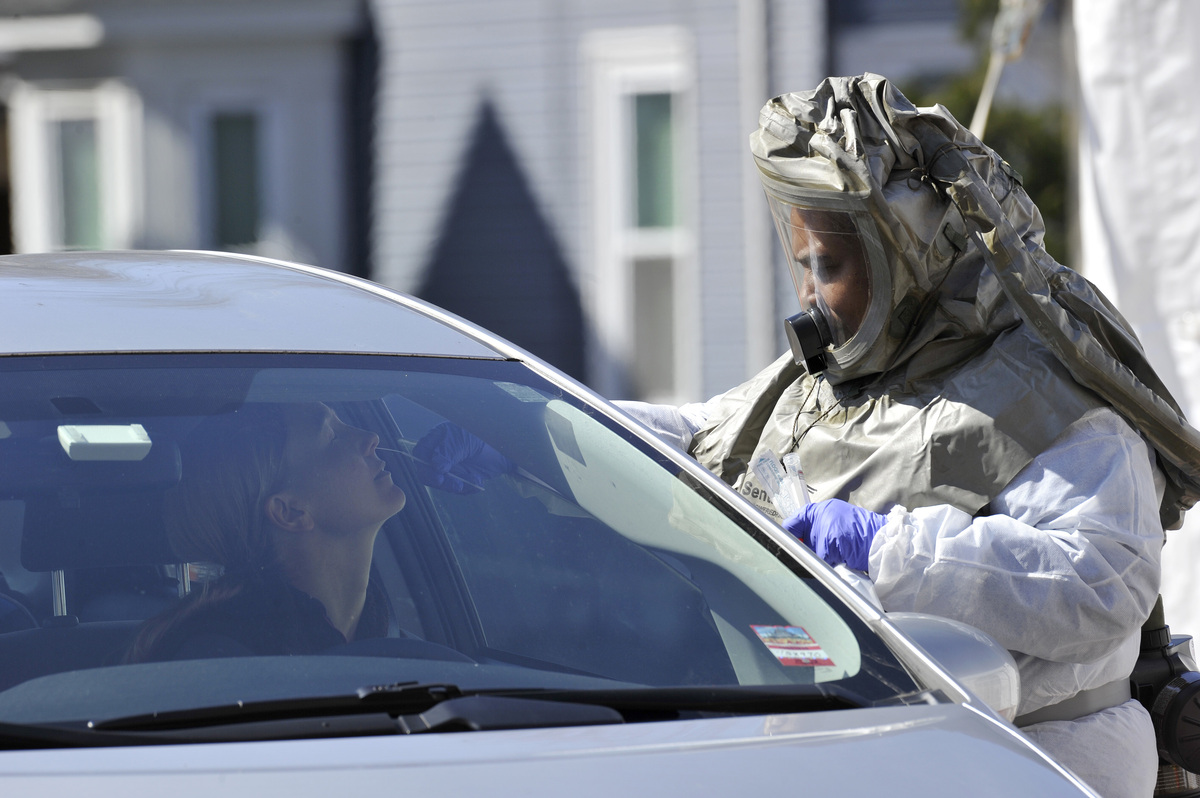 A medical professional takes samples from person at a drive-through coronavirus testing lab set up at Somerville Hospital in Somerville, Mass., on Wednesday.

The Senate approved a new round of emergency funding to address the coronavirus pandemic, sending the legislation to President Trump, who is expected to sign it soon.

The economic relief bill marks the second such aid package in a matter of weeks. The legislation passed Wednesday provides paid sick and family leave for some for U.S. workers impacted by the illness, expands unemployment assistance, includes nutrition assistance and increases resources for testing. Efforts are already underway to put together a third, larger relief measure that could total $1 trillion.

The second bill faced some delays since the House approved it early Saturday morning, and some Republican senators have raised concerns about its provisions. However, Senate Majority Leader Mitch McConnell, R-Ky., urged its passage and said members could address those concerns in the next wave of legislation.

“This is a time for urgent bipartisan action, and in this case, I do not believe we should let perfection be the enemy of something that will help even a subset of workers,” McConnell said ahead of the vote.

The chamber overwhelmingly approved the relief bill by a vote of 90-8.

The Senate also approved the House package while some members practiced new social distancing efforts. McConnell set the new parameters, extending the chamber’s usual 15-minute vote period to 30 minutes so members could spread out during their votes. He also told senators not to gather on the floor and to vote and quickly leave the chamber — though some resisted that advice.

“It allows, for instance, for free testing and treatment,” Schumer, D-N.Y. said ahead of the vote. “We can send this bill to the president and begin work on the next phase, phase three.”

The Senate is going to vote on the House’s proposal. I will support it. But it does not help enough Americans and, crucially, it adds even more uncertainty for small businesses. It will make it all the more urgent for the Senate to pass bold legislation to help small businesses. pic.twitter.com/R0DjHKBLrI

Earlier this month, Trump signed into law a $8 billion in coronavirus response package, the first congressional measure to address the coronavirus. It boosted funding for testing of the virus and lower costs for related medical treatments.

Now, the Trump administration is asking Congress for roughly $1 trillion in new economic relief as lawmakers begin work on the next phase. And there’s growing consensus among Republicans and Democrats that direct payments to Americans will be needed, but how much and when that could happen remains to be seen.

On Tuesday, Treasury Secretary Steven Mnuchin met with Republican senators and said he was working with Trump on the economic package. They are discussing payments to small businesses, loan guarantees for industries like airlines and hotels, and a stimulus package for workers.

Mnuchin was also in talks with House Speaker Nancy Pelosi, D-Calif.; the two spoke late Tuesday on the latest plans.

The Treasury proposal is being cautiously embraced on Capitol Hill, where lawmakers are clear-eyed about the need for swift action.

A senior Republican congressman who spoke to NPR on the condition of anonymity said the White House plan was “a measured response.” The lawmaker conceded that “the most difficult piece” will be how to structure direct payments to Americans but said he was confident payments would happen.

“It’s just the mechanism that’s the question,” he said.

The GOP lawmaker said in order to get a bill through quick, it would have to be a deal cut by all four top leaders in Congress and the White House. With their collective endorsement, it would be virtually impossible to block passage through Congress considering the national crisis.

The concerns touch on one complaint from Senate Democrats, who say that the leaders from both parties should already be involved in the talks, and the move could cause some delays to approving a plan.

“For the Republicans to first stick together and put together their plan, then work it out with the White House, and then come to us and then after that go to the House, will just slow things down,” Schumer said earlier on Tuesday.

Staying until the job is done

McConnell and other Senate Republicans maintain the chamber won’t leave on an extended recess until the third relief plan is approved. McConnell directed several task forces among his Republican members to tackle the new proposal.

Iowa Sen. Chuck Grassley, who chairs the Finance Committee, will lead the charge on developing plans for direct payments to Americans, McConnell said. Tennessee Sen. Lamar Alexander, who chairs the health panel, would focus on the public health fight against the virus. And Mississippi Sen. Roger Wicker is weighing potential relief for key industries hit hardest by the pandemic.

“We are crafting bold and significant legislation to meet this crisis head-on and strengthen our nation,” McConnell said.

Lawmakers continue to call on the Trump administration to boost its actions to respond to needs from health community outside of legislation.

But so much more is needed NOW https://t.co/9QTvlbQn8Y

On Wednesday, Trump said he was invoking the Defense Production Act to direct private firms to produce the critical goods in response to national emergencies. The act allows the speeding up of the production of the critical medical supplies like masks, ventilators and diagnostic test kits.

Democrats had been calling on Trump to use those executive powers to fill the supply gaps before a dangerous shortage. For example, many Democrats have raised concerns in recent days that ventilators in particular are in short supply.

The Defense Production Act “is used in times of war,” Schumer said earlier on the Senate floor. “But we must mobilize as if it were a time of war when it comes to hospitals, beds, supplies equipment.”

A group of 27 Senate Democrats had sent a letter to Trump on Tuesday outlining ways Trump could use the powers, which Congress expanded in 2009.

By Robert Preidt, HealthDay Reporter (HealthDay) WEDNESDAY, April 15, 2020 (HealthDay News) — Americans who are young, liberal and heavy consumers of news are most likely to follow COVID-19 safety recommendations, a new online survey reveals. Three-quarters of the 1,000 U.S. respondents said they followed a majority of recommended social distancing behaviors such as keeping […]

A study in mice suggests that by infiltrating tumors and ramping up the body’s immune response, a type of gut bacteria could be a valuable ally in cancer treatment. In recent years, research has shown that the communities of bacteria that live in our guts — known as our gut microbiota — play crucial roles […]

‘This is a potential public health disaster:’ COVID-19 results from TestUtah.com are raising questions.

Editor’s note: The Salt Lake Tribune is providing readers free access to critical local stories about the coronavirus during this time of heightened concern. See more coverage here. To receive top news in your inbox every weekday morning, subscribe to our Top Stories newsletter. To support journalism like this, please consider donating or become a […]