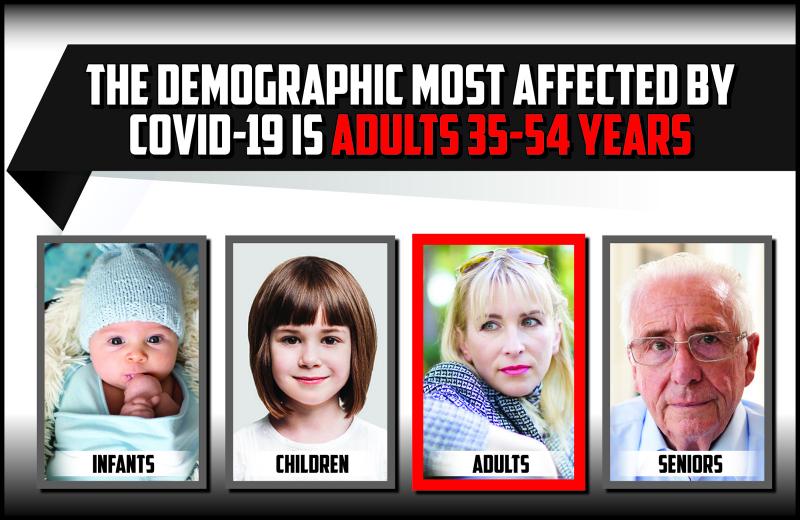 At this stage in Alberta’s fight against the spread of COVID-19, the highest number of residents diagnosed with the virus are between the ages of 35 and 54, though with snowbirds and travellers returning, that trend could easily change.–NEWS GRAPHIC MICHELLE DOUVILLE

Alberta Health says the highest demographic of COVID-19 cases in Alberta are people between the ages of 35 and 54, and the majority are males.

Of the 119 cases across the province by Wednesday (there are now 146, with three in the South Zone and one fatality) 45 are in this age category and most are males.

Those who are 65-79 years old come next, with an almost equal split between male and female.

There are about five cases in the 10 to 14-year age bracket and three between 15-19 years old. They are all males.

There are only a handful of cases that are between the ages of one to four and one is more than 80 years old.

On Wednesday evening Alberta Health revealed one of the two cases of COVID-19 in the South Zone is in Medicine Hat.

By far the highest number of cases in the province, 70 per cent or 83 cases, are in the Calgary zone.

Dr. Deena Hinshaw, Alberta’s chief medical officer of health, has said this could possibly be related to the high number of international flights coming into Calgary. Most cases identified have been travel related.

Hinshaw suggests the age demographic and gender could be an indication of those who have been travelling recently. As snowbirds return from warmer climes we may see an older demographic being diagnosed.

The Edmonton zone has 23 per cent of the cases, the central and north zones each have three per cent followed by the south zone with two per cent.

Although the first case was identified at the end of January the numbers began to surge at the end of the first week in March with a big spike after March 15, according to Alberta Health.

You can look at all the latest data on Alberta Health website which is updated daily.

Why does SARS-CoV-2 spread so easily?

What structural features of the SARS-CoV-2 virus allow it to attack human cells and spread so efficiently? We round up some of the key emerging evidence. Share on PinterestNew insights into the structure of the novel coronavirus may explain why it spreads so quickly among humans. For live updates on the latest developments regarding the […]

Today’s early morning highlights from the major news organizations. Kaiser Health News: Blood Drives — And Donors — Fall Off As Coronavirus Worries Grow Mounting warnings that Americans should stay home and avoid crowds to stop the spread of a deadly new coronavirus are triggering an unexpected — and potentially ominous — downside: a drop […]

MARCH 31, 2020 — Retinal specialists need to weigh the risk for vision loss against the risk for COVID-19 when deciding which patients should be seen urgently vs those whose treatment can be delayed, says new guidance from the American Society of Retina Specialists (ASRS). The recommendations address aspects unique to the subspecialty as well […]