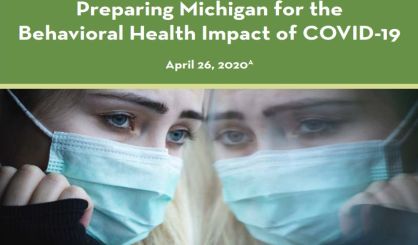 A Grand Rapids-based mental health organization has released a report predicting a 32% increase in statewide suicides due to the pandemic unless action is taken now. Pine Rest Christian Mental Health Services VP of Outpatient and Recovery Scott Halstead tells WSJM News the group studied previous outbreaks, like the 2003 SARS outbreak in Asia.

“Suicide rates went up significantly after those instances,” Halstead said. “Even with just the economic impact, we found that suicides went up about 1.3% for every 1% increase in unemployment. So that was scary information for us.”

Halstead says Michigan is experiencing a rise in many of the stressors that are known to increase risk for suicide. The group’s report recommends taking steps now to improve access to care through awareness, affordability, and tele-health technology. Halstead says there are ways you can help maintain your own mental health.

“I think absolutely getting out. I just looked across the street and saw a bunch of college kids talking. They’re six feet apart, but they’re laughing and talking to each other, which is a really good thing. Taking walks, exercising. People who exercise tend to have a a really positive effect on mental health.”

Halstead urges everyone to watch themselves.

“If you’re noticing that you’re not sleeping well, if you’re irritable, if maybe you’re drinking more or using substances in ways that you don’t historically do or are relying on that, you’re feeling isolated, angry, anxious. Any number of those things, then you want to be asking yourself if you should be talking to somebody.”

Also pay attention to loved ones. Halstead says the research suggests certain groups are at especially high risk, including healthcare providers, surviving caregivers, children and adolescents, older adults, people with pre-existing mental illness, the LGBTQ community, and those with autism spectrum disorder. You can find the report from Pine Rest right here.

The Latest on the coronavirus pandemic. The new coronavirus causes mild or moderate symptoms for most people. For some, especially older adults and people with existing health problems, it can cause more severe illness or death. — As economies stagger, pressures grow to ease virus lockdowns. — Germany to take ‘small steps’ in loosening lockdown […]

New research from Emory University is shedding light on a potential link between post-traumatic stress disorder (PTSD) and mental stress-induced myocardial ischemia in patients with stable coronary artery disease. The study, which was led by Viola Vaccarino, MD, PhD, of the department of epidemiology at Emory University Rollins School of Public Health, yielded results indicating […]