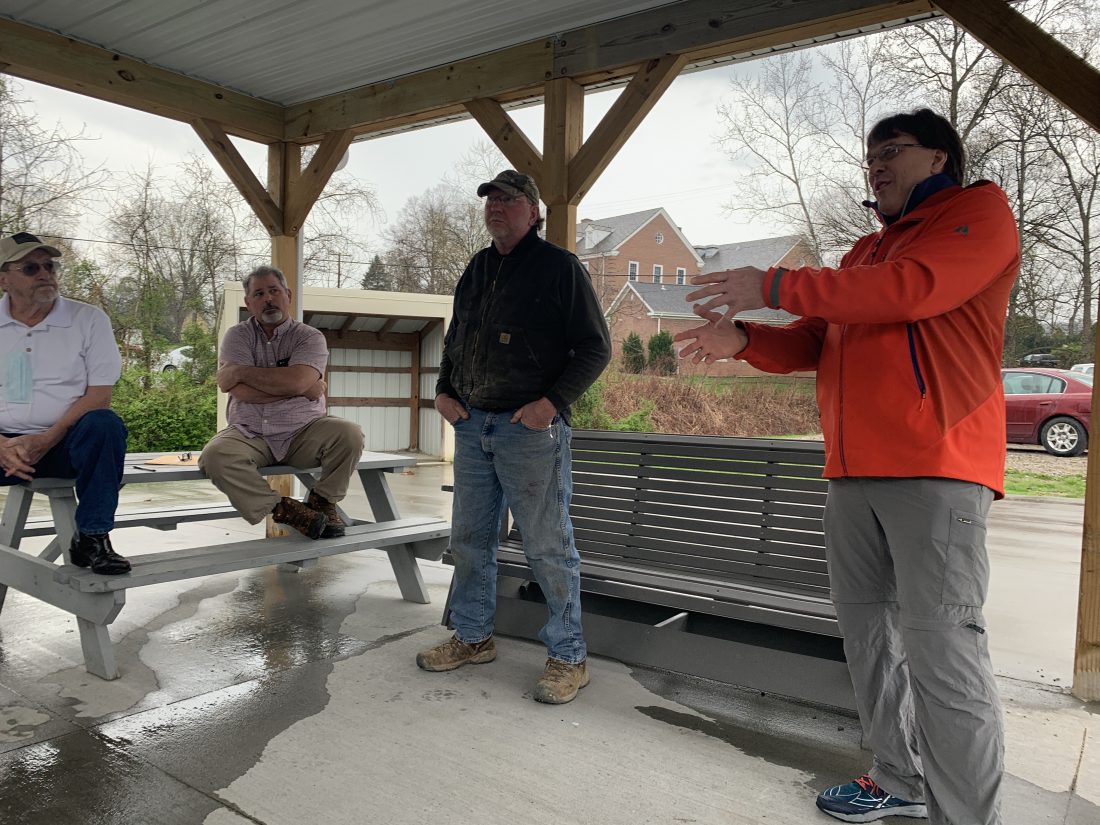 Photo by Janelle Patterson
Washington County Health Commissioner Richard Clark, right, argues against the release of names and addresses of confirmed and suspected cases of COVID-19 to first responders during an emergency meeting of the Washington County Health Department Tuesday. The meeting was held in an outdoor pavilion in Marietta.

Debate over the release of public health data continues in local jurisdictions as COVID-19 spreads.

“There should not be a stigma with this,” said Nat Sistrunk, a board member providing oversight during an emergency meeting for the Washington County Health Department Tuesday.

“This is just a flag in the database, a code,” said Bruce Kelbaugh, board chairman. “This is just to send those names and addresses to our EMA.”

Washington County Prosecutor Nicole Coil confirmed during the meeting that release of the names and addresses is not a violation of the Health Insurance Portability and Accountability Act (HIPAA) and that the Ohio Department of Health encouraged the sharing of information with first responders specifically to aid in the protection of law enforcement, firefighters and EMS.

But Washington County Health Commissioner Dr. Richard Clark pushed back during the meeting’s discussion, saying the science of spread doesn’t change, and so confidentiality should be maintained.

“Release of information should be the same across the state,” he said, arguing that leaving the decision on what information may be released up to local health departments was putting too much weight on those departments.

Health Administrator Roger Coffman also argued that released information to the EMA could eventually be leaked on social media and that contact tracing last week already led to a family member in the county being barred from a market for fear of contamination.

But with only three voting members of the board present, namely Kelbaugh, Sistrunk and Jeff Jones, the motion to share the names and addresses unanimously passed.

Richard Daniell and Dr. Jeff Patey were not in attendance Tuesday, the former as an at-risk individual during the present pandemic and the latter due to increased needs for telehealth and urgent care at his clinic.

Maj. Troy Hawkins and Chief Deputy Mark Warden of the Washington County Sheriff’s Office both spoke in favor of sharing the data Tuesday, noting the need for addresses and names so that officers could adequately prepare to respond to calls at homes and also to police those not following orders to quarantine.

“We look to the local police, we look to the local sheriffs to deal with those types of situations,” Gov. Mike DeWine said Tuesday during his daily press conference, reiterating the need for police powers to enforce both quarantine and social gathering prohibitions in place across the state.

Warden also noted the need to have names flagged within the law enforcement system in the event an individual is homeless.

The county health department also announced Tuesday that several of the county’s 27 confirmed cases are within a skilled nursing care center in the county.

“Residents and staff have been tested for COVID-19, and so far, there are several positive cases,” said the department’s release.

Neither the name nor location of the facility was released.

While Noble County confirmed Monday it is monitoring approximately 10 people while awaiting test results, no tests were confirmed positive Tuesday.

“The Meigs County Health Department is reporting the first confirmed case of COVID-19 in our county,” said Meigs County Health Commissioner Marc Barr in a press release. “At this time, we please ask residents to refrain from calling the health department for questions regarding this case while we complete our disease investigation and notify relevant individuals. Individuals identified as contacts of the case will be advised to self-quarantine for 14 days.”

According to the Ohio Department of Health, the Meigs case is a male in his 50s who was not hospitalized as of Tuesday but had an onset illness date of March 28.

“We were fully aware this was only a matter of time and we urge residents not to panic,” added Barr.

Both the Morgan and Monroe county health departments have still declined to release any demographic information, citing the Ohio Department of Health’s direction that they are not required to do so.

Kara Dixon, director of nursing for the Morgan County Health Department, said she would also not release how many individuals are being monitored while awaiting test results nor the numbers of contacts of individuals who have confirmed cases.

“When I talked with my positive patients they voiced with me that they would rather not have it released and we are honoring their wishes,” she said.

Athens County remained Tuesday with three confirmed cases of the virus and one confirmed death.

Janelle Patterson can be reached at jpatterson@mariettatimes.com.

• Noble County had no confirmed cases of the virus as of press time Tuesday.

Today’s breaking news and more in your inbox

How long will it take to rid PFAS from private wells?

A reader’s question spurs NC Health News to look for answers. How does 20 to 30 years sound? By Greg Barnes As more sampling is performed, the number of private drinking water wells found to be contaminated by GenX and other “forever chemicals” continues to surge in an area surrounding the Chemours Fayetteville Works plant. […]

The White House coronavirus response coordinator on Tuesday suggested that “there’s a fine line” between balancing the economic needs of Americans and the fight against the pandemic. Dr. Deborah Birx in an interview on “TODAY” on Tuesday responded to questions about President Donald Trump’s assertion at a press conference Monday that the shutdown of many […]

North Korea’s male-dominated Kim dynasty may be about to hand over the keys to the Hermit Kingdom to a woman. With speculation swirling over Kim Jong Un’s health, all eyes have turned to his sister and closest confidant, Kim Yo Jong, as his most likely successor. Yo Jong may lack the bizarre, high-fade bouffants of the three generations of male […]