Chief Medical Officer Brendan Murphy says not enough is known about COVID-19 to provide a 12-month strategy on relaxing restrictions.

He provided an update about the coronavirus response after today’s National Cabinet meeting.

Earlier this afternoon, Prime Minister Scott Morrison said Australia needed to get 1 million people back to work in a COVID-19 safe workplace.

Stay up-to-date on the coronavirus outbreak

Follow the latest updates in our live coronavirus blog.

Ah, random hugging. As in the closing moments of the Freo craft beer festival? It seems like YEARS ago now, packed away as a find memory of the glorious golden preCovid19 era

I’ve never heard of the Freo craft beer festival, Shell, but a single tear just rolled down my face for all the things we’ve lost.

Hi guys, thanks for all the amazing coverage today. Lots of press conferences and announcements to keep on top of! Just wondering whether the graphs the PM spoke to in today’s conference have been released?

No problem at all. We’ll definitely get you the graphs as soon as they land in my hands.

13 days straight with no new cases in SA

South Australia has recorded a 13th day with no new coronavirus cases.

Only five active cases remain with two people in hospital.

429 people have recovered from the virus.

The Premier Steven Marshall says SA is in a unique position for a COVIDSafe return to normal with the fewest cases, a zero rate of infection and the highest number of students back at school.

Another resident has died from COVID-19 at Sydney nursing home Newmarch House, bringing the total number of coronavirus deaths at the home to 16.

The operators of the nursing home have not revealed the age or identity of the latest victim.

Anglicare Sydney has released a statement:

Anglicare Sydney is deeply saddened to announce that a resident at Newmarch House who had tested positive for COVID-19 has passed away this morning. The family has been contacted and all relevant authorities have been notified. We extend our sincere condolences to the family for whom this is both distressing and tragic.

The incredibly contagious nature of the virus is evidenced by the fact that in the last 24 hours three staff members of Newmarch House have tested positive. They are now selfisolating. The positive test results were discovered during our daily, rigorous testing regime which is now being applied to all staff working at Newmarch House prior to the commencement of their shifts.

Anglicare Sydney appreciates the expertise being provided by infection control specialists which have been generously provided by government.

Our team are working tirelessly to contain this virus which continues to have a devastating effect on residents, families and staff at Newmarch House.

“I think it is unlikely that we will be able to have very large, close-packed crowds until we have got rid of this virus. So unfortunately I can’t see 100,000 people packing a grand final of football but I think we can do a lot – but as we get more and more confident and as people start behaving differently, we can start to do more.

“So I wouldn’t want a crystal ball too far ahead but I don’t think we will be shaking hands and randomly hugging and getting crowded in rooms for a long time.”

We don’t know why, but children are not transmitting this virus, Murphy says 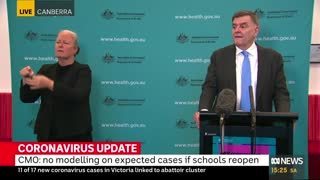 “There is now an increasing amount of data that, particularly younger kids, don’t seem to get the infection, and even when they do there is now a number of studies that show they do not seem to be transmitting to their fellow classmates in the school. We don’t know why. It is a very unusual feature of this virus but all of the data that we’ve seen, both in Australia an in other parts of the world suggest that children are not transmitting this virus, which is a wonderful thing.” 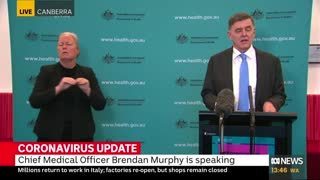 He says he is just going to give a brief general health update today.

“We have a diversified supply line, we have enough tests to do all of the expansions that we want to do, certainly we’ve got sufficient supply over coming months and we are diversifying  our supply lines. So we want to continue to increase our testing numbers. We’re still not at the level we want to be at. The challenge with this virus is that nobody really knows what the long-term future holds. Our strategy at the moment is to keep Australians safe over the next two to three to four months whilst safely relaxing restrictions so that we can get on with economic activity and our lives in a COVID-safe way.” 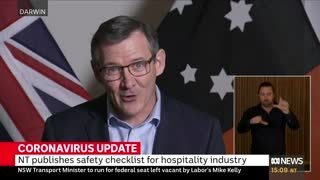 “We had a simple request over the weekend, don’t do a Bondi and you didn’t do a Bondi. You got out and backed locals and did it safely. In some ways this long weekend was a bit of a test and we passed that test with flying colours, so thank you, you are all legends.”

“Stage 1 done, Stage 2 to come. So far, so good. But nobody is celebrating early. There is still a long way to go.”

And that’s the end of the press conference. Our friend Dean Bilton has summarised everything for you if you want a snapshot…

And if you want to read more about the trans-Tasman bubble: 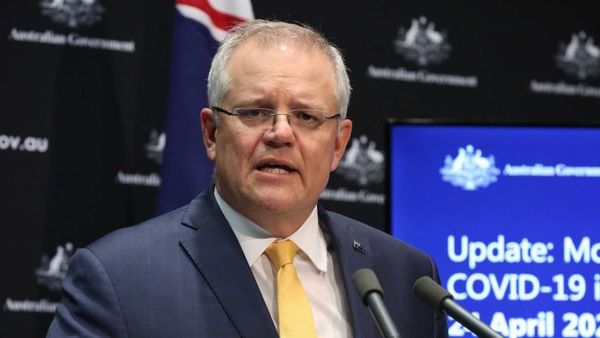 Here’s the full write on Mr Morrison’s comments about reviving the economy: 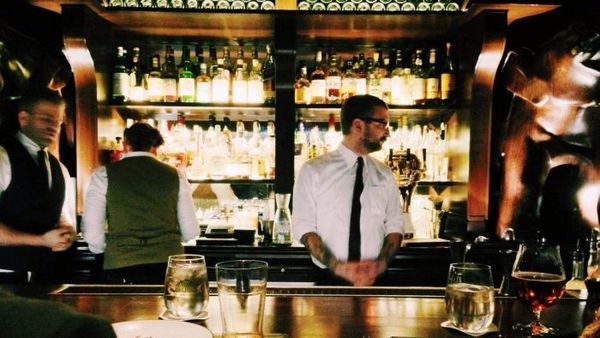 Australia and New Zealand are committed to introducing a trans-Tasman COVID-safe travel zone as soon as it is safe to do so, Prime Minister Rt Hon Jacinda Ardern and Prime Minister the Hon Scott Morrison MP have announced.

The Prime Ministers agreed to commence work on a trans-Tasman COVID-safe travel zone – easing travel restrictions between Australia and New Zealand. Such an arrangement would be put in place once it is safe to do so and necessary health, transport and other protocols had been developed and met, to ensure the protection of public health.

This arrangement recognises that Australia and New Zealand are both successfully addressing the spread of COVID-19.
Any arrangement would need to take into account state and territory movement restrictions.

“Building on our success so far in responding to COVID-19, continuing to protect Australians and New Zealanders remains an absolute priority,” the Prime Ministers said. “We will remain responsive to the health situation as it develops.”

Australia better positioned now if there are new outbreaks: PM 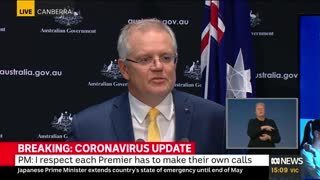 Mr Morrison says Australia is much better prepared now if there are increased outbreaks during a gradual re-opening of the country.

“Let’s remember that one of the key things we have done in the last six to eight weeks has been to triple our ICU capability.

“If we take ourselves back six-eight weeks ago … things were moving very quickly at that time. What I’d add to that, at that time there was not the same since of social distancing, not the things we have in place now, not the same stockpile of personal protective equipment, there was not the number of respirators that we now have. There was not 5 million people on a COVIDSafe app so we have built these protections over the last six weeks and more and that means that we are in a much stronger position to resist and deal with any increase in cases.”

On having New Zealand Prime Minister Jacinda Ardern attend the National Cabinet, and the discussion of the trans-Tasman bubble

“It was great to have the Prime Minister with us today.

“The discussion was at my invitation, for Jacinda to be able to share what the experience has been in New Zealand with my state and territory colleagues, that was the primary purpose of today’s discussion.

“The Prime Minister and I have been now for several weeks been talking about a safe travel zone between Australia and New Zealand. It is still some time away. It is important to flag it because it is part of the road back, at some point both Australia and New Zealand. Connect with the rest of the world again, the most obvious place for that to start is between the two countries.”

Mr Morrison says the COVIDSafe app will pass 5 million downloads today, with a target of 16 million

“That’s a welcome response but we would like to see a bit more.

“The first job of the COVIDSafe app is to keep you safe and that is its best reason why I would encourage people to continue to do that.”

Head of the coronavirus commission Nev Power says there are four key issues in ensuring businesses are safe to reopen: 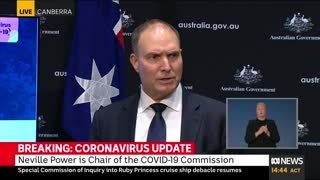 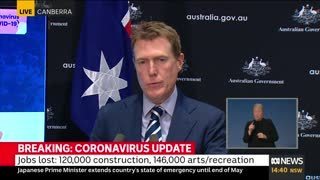 Mr Morrison says the Government is intent on getting things moving again, but it must be done safely 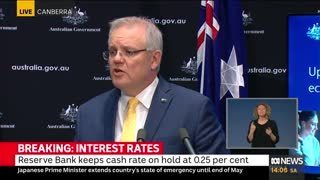 “The National Cabinet are not in any way unaware of the serious implications of the decisions we have had to take now over many months, and that is why we are not seeking to delay any time at all in terms of trying to get things moving again, but we must be able to move them forward safely.

“To get Australians back to work what is essential is they could go back into a COVID-19 safe workplace, and this is something the Minister for Industrial Relations, together with the unions and others have been working on for some time. Already, businesses are acting on this. It is not just being able to go back to a workplace that is safe but also about being able to do that confidently and also about being able to go into a workplace where there are, and let’s not forget when we ease these restrictions, you will see numbers increase in some areas, you will see outbreaks occur in other places, that is to be expected. What matters is how you deal with it, and how you respond to it, and it is important that businesses, employees and employers have the tools to deal with the COVID-19 environment and ensure they are all working together to support a COVID-19-safe workplace”

Scott Morrison on the goal of getting people back to work 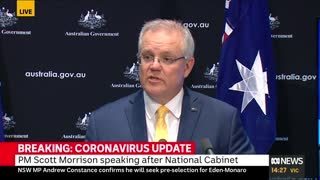 He says the focus today was on the topic of getting Australia back to work.

“The Commonwealth government is under no illusion about the ongoing costs of these measures, and it certainly puts enormous pressure, as it should, on the timetable as we seek to move Australia back to that safe economy because of those significant costs, and as we plan our way back in getting there was a million Australians back to work, those costs are expressed in so many different ways.”

Mr Morrison throws out some figures:

The White House coronavirus response coordinator on Tuesday suggested that “there’s a fine line” between balancing the economic needs of Americans and the fight against the pandemic. Dr. Deborah Birx in an interview on “TODAY” on Tuesday responded to questions about President Donald Trump’s assertion at a press conference Monday that the shutdown of many […]

Gov. Jared Polis said Wednesday that the state will close schools through April 30, and that Colorado had placed a large order for medical equipment to fight the novel coronavirus outbreak. Almost a million public and private school children in Colorado will not be returning to their school buildings until April 30 at least, as […]

Get the latest news on coronavirus and more delivered daily to your inbox. Sign up here. Rep. Elise Stefanik, R-N.Y., claimed victory Tuesday after raising objections to a plan by New York Gov. Andrew Cuomo that would have used the state’s National Guard to take 20 percent of unused ventilators and other medical equipment in upstate New York […]