At least 114 new deaths from the coronavirus outbreak were reported on Thursday, bringing the death toll to 2,118 in China.

The drop, the largest in almost a month, came after Chinese authorities changed their methodology for counting cases in Hubei province, the epicentre of the outbreak, to only include those confirmed through genetic testing.

Here are the latest updates:

WHO says ‘no time for complacency’ as China coronavirus cases fall

A continued decline in the number of new cases of coronavirus infections in China is encouraging, the World Health Organization said, but it is too early to know if this trend will continue.

“We are encouraged by this trend but this is no time for complacency,” the WHO’s director general, Tedros Adhanom Ghebreyesus, told a briefing in Geneva.

He noted that the number of coronavirus cases in the rest of world was very low compared inside China, but added: “That may not stay the same for very long”.

A Chinese diplomat backed Pakistan’s decision not to evacuate Pakistani students from the province at the centre of China’s coronavirus outbreak, a day after parents confronted government ministers demanding their children be brought home.

Pakistan has ruled out bringing back more than 1,000 students in Hubei province and its capital Wuhan, where three-quarters of the more than 2,000 deaths from the outbreak have been recorded.

“If such large number of students come back, this will cost huge health operations for the Pakistani government. If the isolation facilities are not ready, this can cause another outbreak of this virus in Pakistan,” Li Bijian, Consul General of China in Karachi, told reporters.

China touted a big drop in new cases of the coronavirus as a sign it has contained the epidemic, but fears grew abroad after two former passengers of a quarantined cruise ship died in Japan and a cluster of infections increased in South Korea.

Chinese officials said this week their drastic containment efforts, including quarantining tens of millions of people in Hubei and restricting movements in cities nationwide, have started to pay off.

“Results show that our control efforts are working,” Foreign Minister Wang Yi said at a special meeting on the virus with Southeast Asian counterparts in Laos.

Russia losing 1bn roubles a day in trade with China

The coronavirus outbreak of coronavirus in neighbouring China had caused a drop in trade with Russia of 1 billion roubles ($15.7m) a day, Finance Minister Anton Siluanov said.

Siluanov made the comments to the RBC online news portal.

Switzerland has postponed a high-level health summit that had been scheduled for next week because of the outbreak of the deadly new coronavirus.

The decision was made “because numerous participants must remain in their own countries to deal with the COVID-19 epidemic”, Switzerland said in a statement, without announcing new dates.

The Ministerial Summit on Patient Safety was due to take place in Montreux, in western Switzerland, on February 27 and 28.

Iran call for religious gatherings to be suspended in Qom

Iranian health officials urged all religious gatherings to be suspended in Qom, news agency ISNA said, after two more people tested positive for the coronavirus in the holy city, where two had previously died from infection.

KLM airlines extends ban on China flights due to coronavirus

KLM, the Dutch arm of Air France KLM, said it will extend a ban on flights to China because of the coronavirus outbreak.

“All KLM flights to Beijing and Shanghai have been suspended until 28 March 2020,” the airline said on its website. “Flights are expected to resume on 29 March 2020.”

Another 13 people on board a cruise ship that was quarantined off the coast of Japan have been diagnosed with the new coronavirus, the country’s health ministry said.

Confirmation of the new cases, from 52 additional test results, brought the total number of infections diagnosed on board the Diamond Princess so far to 634, the ministry said in a statement. 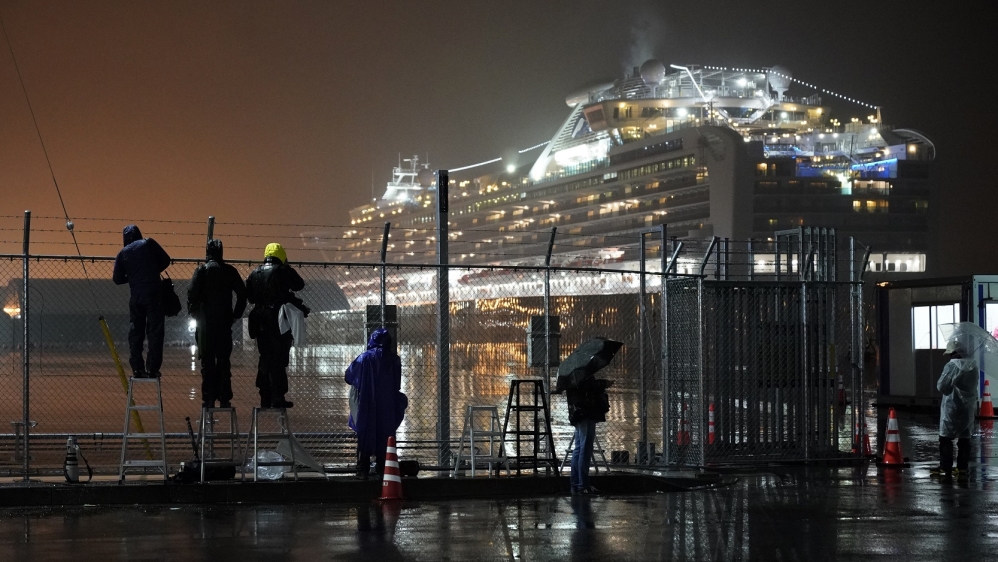 Three patients have tested positive for the coronavirus in Iran, a health ministry spokesman said.

“Two people have tested positive for COVID-19 in Qom and one person in Arak, bringing the total of confirmed cases to five in Iran,” Health Ministry spokesman Kianush Jahanpur said in a tweet.

Two people died in Qom from the virus on Wednesday, bringing the total to five reported cases in the country.

Residents in central Ukraine have protested the arrival of a plane carrying evacuees from China’s Hubei province, fearing they could be infected with the coronavirus despite authorities insisting there was no danger.

Protesters from the village of Novi Sanzhary blocked the road leading to a sanatorium where the evacuees are due to be held in quarantine for at least two weeks to make sure they were not carrying the virus. 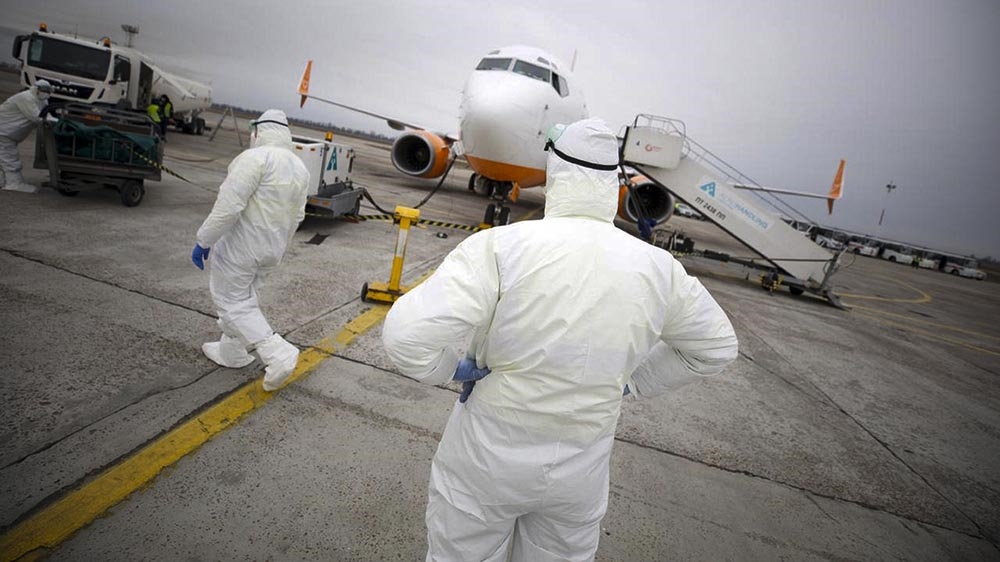 South Korea health authorities have reported the first death from coronavirus in the country.

Infections have ballooned in recent days, raising the total to 104, with many traced to a church in the central city of Daegu. On Thursday alone, the country announced 53 new cases. 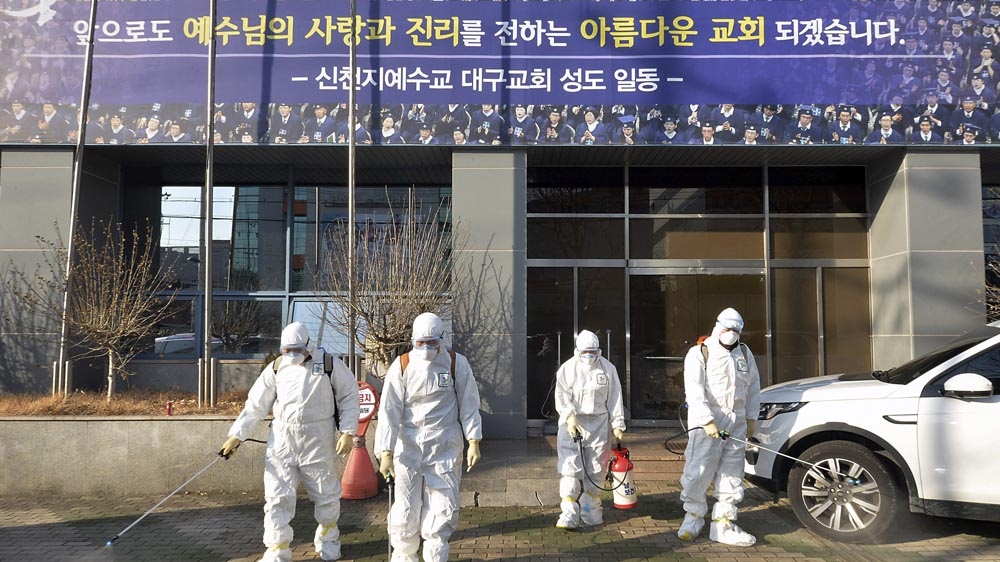 Egyptair to resume flights to China from next week

Egyptair said in a statement it will resume some flights to and from China starting next week.

The national airline suspended all flights to China in early February over the coronavirus outbreak.

“Egyptair has decided to resume a flight weekly every Thursday,” it said.

An outbreak of disinformation in China and elsewhere has hurt global efforts to combat the new coronavirus, said a specialist infectious disease lab located at the epicentre of the epidemic.

The lab has been at the heart of a number of conspiracy theories, including that it “artificially synthesised” the virus.

In a statement, the state-backed Wuhan Institute of Virology said “internet rumours” had “received close attention from all walks of life” and “caused great harm to our research staff on the front line of scientific research”. 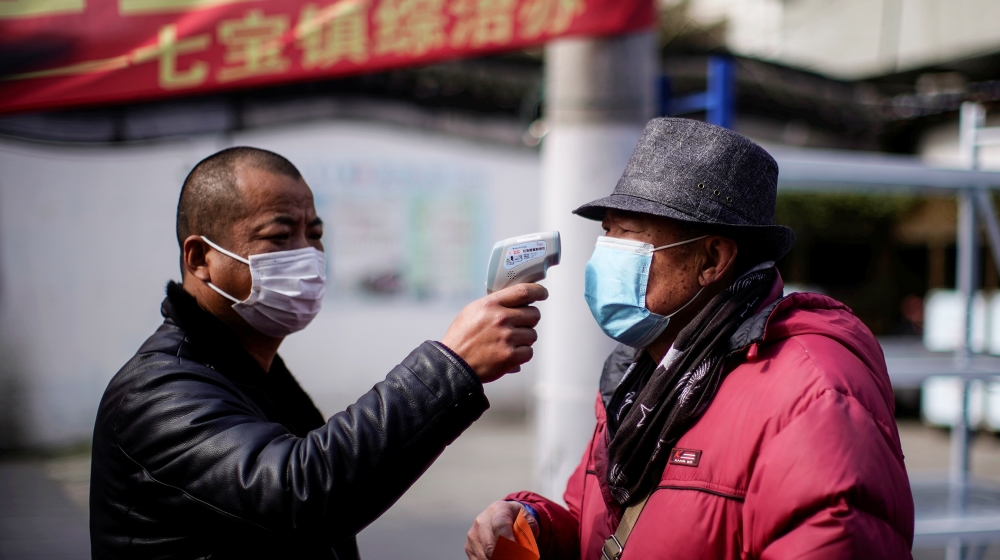 A man checks the temperature on a street in Qibao, an old river town on the outskirts of Shanghai, China [Aly Song/Reuters]

Australia will extend a ban on arrivals from mainland China into a fourth week to contain the risk of exposure to the coronavirus, Prime Minister Scott Morrison said.

“The National Security Committee of Cabinet has today decided that the continuing coronavirus infections in mainland China make it necessary to continue the travel restrictions on foreign nationals entering Australia for a further week to 29 February,” Morrison said in a statement. 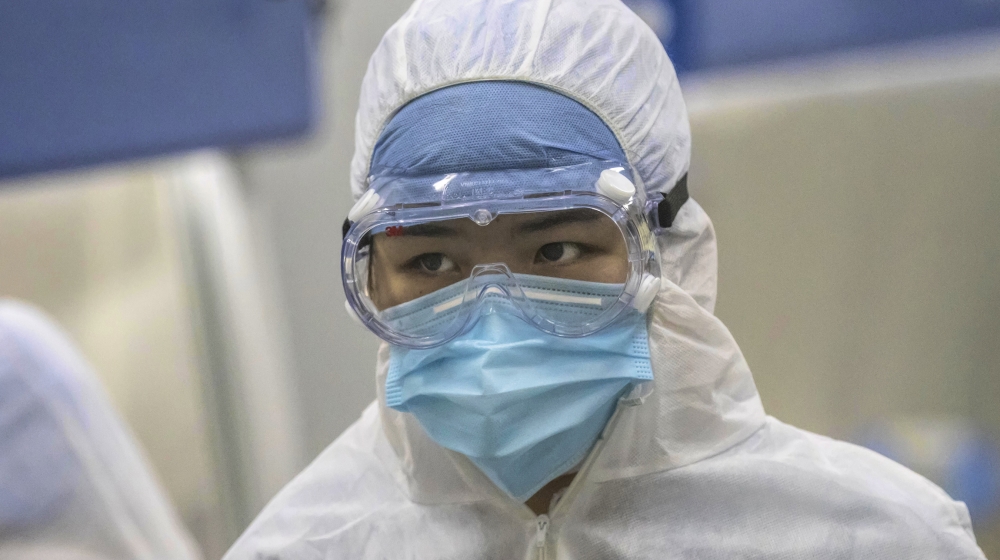 Geng told reporters during a press briefing that China was not interested in the division of labour at the Wall Street Journal in response to a question on why it is acting against the paper’s journalists, who had no involvement in the publication of a opinion column in the paper that the Chinese government found offensive.

The mayor of South Korean city of Daegu has urged its 2.5 million people to stop going outside as its virus cases spike.

Mayor Kwon Young-jin made the request in a televised news conference after the southeastern city and nearby towns reported 35 additional cases of infection with the new coronavirus on Thursday.

Health authorities say 28 of those 35 patients went to church services attended by a previously confirmed virus patient. South Korea has reported a total of 82 cases so far.

Japan’s health ministry reported on Thursday that two elderly cruise ship passengers who were hospitalised with the viral infection have died.

The ship had a total of 621 confirmed cases of the virus, the most in any single location outside of China.

South Korea reported 31 new cases of coronavirus on Thursday, bringing the number of people infected in the country to 82, Korea’s Centers for Disease Control and Prevention (KCDC) said in a statement.

Of the new cases, 23 cases were traced to church services that a 61-year-old patient who tested positive had attended in the central city of Daegu, the agency said.

On Wednesday, Shincheonji Church posted a statement on its website confirming 10 of its members were infected by the woman, who had attended services. 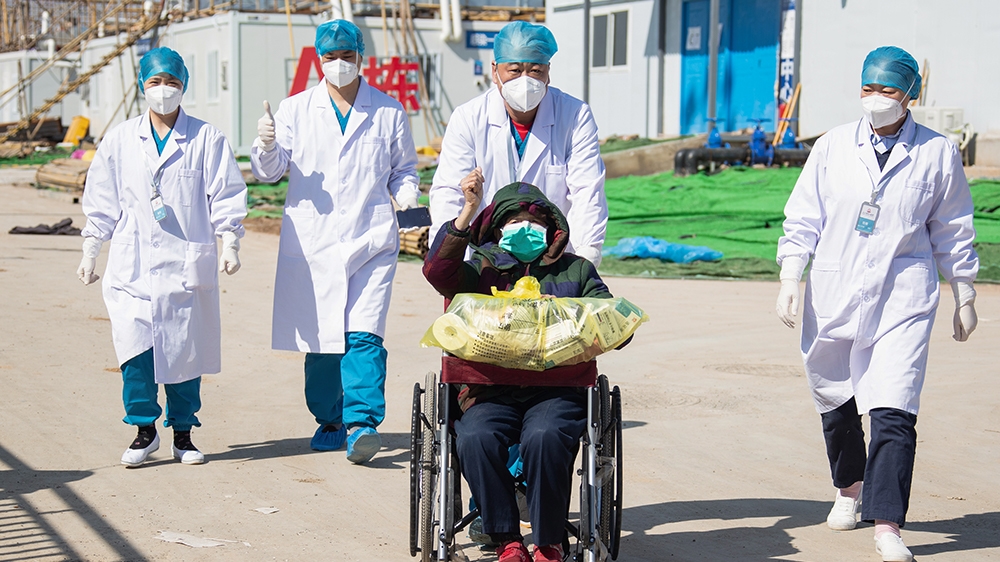 A group of Australians landed in Darwin airport on Thursday after being evacuated from the virus-stricken cruise ship in Japan.

About 180 nationals and permanent residents had earlier left Japan on a Qantas plane chartered by the Australian government, local media reported.

The evacuees had been confined on the Diamond Princess cruise ship in Yokohama for the past two weeks.

The ship had a total of 621 confirmed cases of the virus, the most of any single location outside of China.

US Secretary of State Mike Pompeo has denounced China’s expulsion of three Wall Street Journal newspaper reporters and urged Beijing to respect freedom of the press.

“Mature, responsible countries understand that a free press reports facts and expresses opinion. The correct response is to present counter-arguments, not restrict speech,” Pompeo said in a statement.

The move follows a complaint about the headline of an opinion article, which referred to China as the “Real Sick Man of Asia” and a decision by Washington earlier this week to treat five government-controlled Chinese news organisations as foreign government functionaries.

All Ukrainians being evacuated from China are healthy: Deputy health minister

All Ukrainians being evacuated from China’s Hubei province this week are in a healthy condition, Dmytro Koval, the deputy health minister, told reporters.

“Everyone is healthy,” he told a televised briefing. “There is no threat”.

Ukraine is evacuating 48 of its citizens in response to the outbreak. They are expected to arrive on a charter plane at 8am local time (06:00 GMT) and be put in quarantine for two weeks. Several foreigners are being evacuated on the same flight.

Man with coronavirus in Egypt recovering, no longer a carrier: WHO

The World Health Organization (WHO) said that the person previously confirmed as having coronavirus in Egypt is on his way to recovery, after latest tests showed he was “no longer carrying the virus”.

“He will remain in quarantine until the full 14-day period is over and will be undergoing further required tests to ensure he was fully recovered,” WHO spokeswoman Inas Hamam wrote in an email.

Two Iranians have died in hospital after testing positive for the new coronavirus in the central city of Qom, the head of the city’s University of Medical Sciences told Iran’s Mehr news agency, saying the two had died of a “respiratory illness”.

Separately, Health Ministry official Kianush Jahanpur said in a post on Twitter that “both patients died in ICU due to age and immune system deficiency”.

Iran had confirmed the two cases – the first in the country – earlier on Wednesday.

Scrambled eggs with tomatoes – that’s the first dish Yangyang made for herself after being discharged from No 7 Hospital in Wuhan.

After escaping what she describes as a near-death experience, Yangyang is now one of the estimated 14,000 people in mainland China who have beaten the COVID-19 virus. 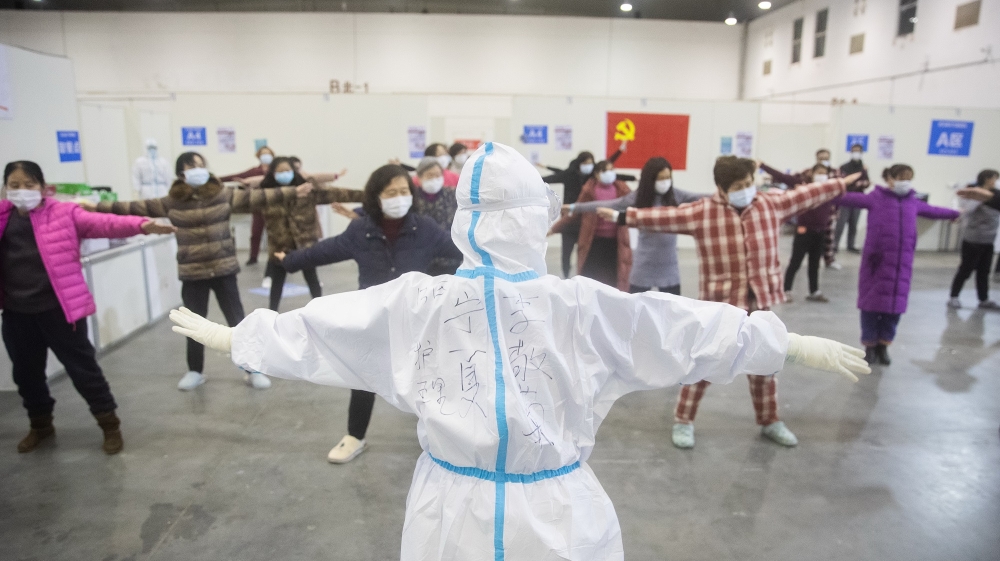 Some 14,000 people have reportedly recovered from coronavirus in China [Stringer/EPA]

Malaysia’s MYEG Services Berhad said it had developed a coronavirus risk-profiling system for visitors from China and was offering the artificial intelligence-based serviced to the government of Malaysia and the Philippines.

The fully-automated system analyses a “vast number of available data points, including visitors’ previous known whereabouts as well as heart rate and blood pressure readings crossed-referenced against public transportation ridership and exposure to locations with incidences of infections,” MYEG said in a statement to the stock exchange.

HIV patients in China risk running out of drugs: UNAIDS

Nearly a third of the more than 1,000 HIV-positive people surveyed by UNAIDS said lockdowns and restrictions on movement in China meant they were at risk of running out of their HIV treatment in the coming days.

Of these, almost half – 48.6 percent – said they did not know where to collect their next antiretroviral therapy refill form.

INDIANAPOLIS (WTHR/TEGNA/AP) — Monday’s latest updates on the coronavirus pandemic. White House Coronavirus Task Force update President Trump told reporters there are still a number of hot spots around the country where the virus outbreak is continuing to heat up. President Trump said the country will have them contained. The President said tremendous progress is […]